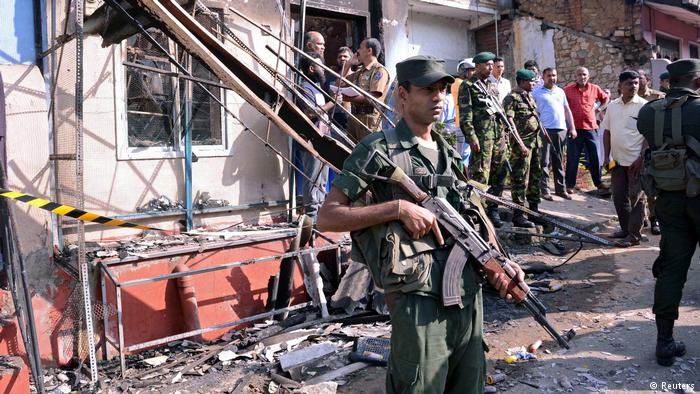 Riots in Kandy were sparked when a Sinhalese truck driver was assaulted on 22nd February by four reportedly drunk Muslim youth after a traffic accident. The truck driver died on 2nd March due to injuries inflicted on him. The accused youth were arrested on the day of the incident itself and remanded till 7th March. Sinhalese mobs began attacking Muslim properties in the region, resulting in widespread damage to property. According to the government, 465 houses, businesses and vehicles were damaged. The Sri Lankan Government declared emergency, which some felt was over reaction of the Government, clamped down on social media and imposed curfew. Emergency was last declared in 2011 during the civil war.

Both the incidents show the widespread fear, suspicion and prejudices prevalent against the Muslim community. Muslim community is diverse including the Moors, Malays, Bohras, Khojas and Memons, constituting 9.66% of the population of Sri Lanka according to 2012 census. Moors speaking Tamil are the largest ethnic group within Muslim community constituting 9.30% of the population of Sri Lanka, while few of them speak Sinhala as primary language. Islam arrived on the shores of Sri Lanka since 7th century C.E. along with Arab traders who married and settled on the Island. They adopted the local Tamil language and culture. Sri Lankan Moors are descendants of Marakkar, Mappilas, Memons and Pathans of South India.

The LTTE targeted Moors when they resisted the claim that Moors were Tamils converted to Islam. Moors claimed their separate identity as progeny of Arabs. Few hundred Moors were killed while hundreds of thousands were displaced from their homes and their properties destroyed by the LTTE as they claimed the northern and eastern territories for Tamil Elam. Sri Lankan Moors and Sinhalese then joined hands during the 26 year civil war. Under attack from LTTE on one hand, and rise of Sinhalese Buddhist nationalism on the other hand, the Muslim community turned to Islam for stronger bonds among themselves. Prior to May 2009, the principal adversary of extreme Sinhalese Buddhist movements was the Tamil ethnic community. The Moors were not on their radar. However, after the threat from Tamil Elam was subdued, the extreme Sinhalese Buddhist nationalism turned its attention to new adversaries. New adversaries are necessary to project themselves as saviours, nay, custodians of Sinhalese Buddhist community and achieving hegemonic power over not only ‘others’ but also within the Sinhala Buddhist community itself. They now turned to already besieged Muslim community with Islamophobia on rise to find an adversary in them. A Buddhist monk asked this writer, why the Muslims who had assimilated into the Sinhala culture were asserting their Islamic identity since the 1980s? They had ‘vanquished’ one – Tamil Elam which resisted assimilation and, the ones who were part of Sinhala culture were now posited as those ‘asserting’ separate identity.

Bodu Bala Sena (BBS) – Buddhist Force Army was founded by monks Kirama Wimalajothi and Galagoda Aththe Gnanasaara after they parted away from Jathika Hela Urumaya. In their first national convention held in 2012 problematized Islamic identity. They demanded a single legal system, opposed halal food and Muslim women wearing abaya or burqa, Buddhist monks to teach history and other subjects and preferential treatment in university admissions. They demanded ban on birth control measures for the Buddhist community. They were demanding privileges for Buddhists on one hand, and cultural assimilation of Muslims or rather, de-Islamization on the other hand as post civil war future of the island. The BBS stands for strong centralized authoritarian state which would ensure protection of Sinhala Buddhist cultural and religious traditions and were against multi-racial, multi-religious and multicultural nature of Sri Lanka.

The extreme Buddhist Sinhalese nationalism seeks to mobilize the majority Buddhist Sinhala community by instilling fear of the minority Muslim community which is less than 10%. They argue that Sinhala Buddhists have only one country where they belong to unlike Muslims, Hindus and Christians who have other countries. Moors too have only one homeland and so do Sinhala Christians! They problematize ‘mosques springing up everywhere’, ‘faster growth of Muslim population’ and ‘conversions by Christians’.

The BBS General Secretary Gnansara welcomed the victory of Narendra Modi Govt. in India. He claimed they were in discussion with the Hindu Supremacist organization RSS in India to form what he called ‘Hindu-Buddhist peace zone’ in South Asia and including Myanmar’s extremist Buddhist nationalist Wirathu Group 969. Though Ram Madhav, General Secretary of the BJP denied that they were in talks with BBS, he posted comments appreciating BBS. He wrote, “The Bodu Bala Sena essentially talks about protecting the Buddhist culture of the country from foreign religions”. RSS too claims to do that replacing ‘Hinduism’ for Buddhism. Wirathu Group 969, BBS and RSS have common imagined enemies in followers of Islam and Christianity, and profess a duty to save their respective ‘only homelands’ from being predated by Islam and Christianity. The three Buddhist and Hindu Supremacist organizations posit imagined threat from imagined enemies and hype up fear within the majority community in order to project themselves as protectors of their respective cultural heritage. They have little respect for truth, established procedures and democratic institutions. In the case of recent anti-Muslim riots in Kandy, the Muslim youth had already been arrested by the police on the charge of beating up the truck driver on the same day of the incident on 22nd February; and in Ampara, prejudices against Muslims led the Sinhala customers of hotel owned by Muslims to imagine contraceptive pills in meals served to them, notwithstanding the fact that there are no contraceptive pills that cause permanent and irreversible sterilization. They did not wait for investigation of their suspicion. Even if their suspicion were to be true, who should inflict punishment upon whom and in what measure?

The right wing extremists use insignificant everyday incidents like scuffle over truck-rickshaw traffic incident or tablet like stuff in the meal served to them as an excuse to inflict collective punishment on all members of the community and those who have no role or control over the incident. In order to purge the ‘other’ from their midst, they hype up the conflict to the level of continuous and ongoing war with the ‘other’. In this war however reluctant, weak and insufficient protection afforded to the ‘other’ by law is immediately stigmatized as appeasement of the ‘other’. The extremist supremacists are more at war with democracy and rule of law and war with the ‘other’ is the route. At a rally in 2013 attended by 16,000 people, including 1,300 Buddhist monks, the BBS general secretary Galagoda Aththe Gnanasara unveiled the ‘Maharagama Declaration’. He stated, “[t]his is a government created by Sinhala Buddhists and it must remain Sinhala Buddhist. This is a Sinhala country, Sinhala government. Democratic and pluralistic values are killing the Sinhala race”. He called upon the Sinhalese Buddhist attending the rally that they “must become an unofficial civilian police force against Muslim extremism. These so-called democrats are destroying the Sinhala race”. The Wirathu Group 969 has always supported the Military Junta in Myanmar and the RSS was always unhappy with the Indian Constitution which they say was based on western traditions, a veiled attack on equal citizenship rights.

The BBS has also learnt a tactic or two from the RSS. In a rally held in Kandy on 17 March 2013, BBS announced that the 10th-century mosque at the Kuragala Buddhist monastery complex in Ratnapura District had been constructed on a Buddhist heritage by Muslim fundamentalists. While India was ruled by Muslim Emperors, for the Sangh Parivar to claim that Babri Masjid was built after destroying Ramjanmabhoomi Temple, Sri Lanka was not. It was a Portuguese Colony and later a British Colony. BBS general secretary Gnanasara also accused the Muslim owned Fashion Bug and No Limit retail chains of converting its Buddhist Sinhalese employees to Islam. The Muslim owned Fashion Bug clothes shop in Pepiliyana, Colombo District was attacked on 28 March 2013 by a mob led by Buddhist monks. While these right wing supremacists problematize foreign cultural influences, they themselves freely borrow from foreign political ideologies, including more than a leaf from Nazis and Fascists.

However there are inherent contradictions and inconsistencies in their ideologies. While they complement each other’s electoral victories as good for the stability of the region and share common ‘enemies’ in Islam and Christianity, and have ‘held high level talks’, their political goals would actually pit them in war against each other in the long run. While the BBS talks of protecting Sinhalese Buddhist homeland, RSS’s goal is Akhand Bharat with common culture and religion, whose boundaries not only include Afghanistan, Pakistan, Bangladesh, Nepal, Sri Lanka, but also Myanmar and parts of China! Sri Lanka is a land wherein Lord Ram waged war and rescued his wife Sita from Ravana’s custody.

Through their hypes, the right wing supremacists create even stronger insecurity among the marginalized minority practically abandoned by state, which in turn pushes them (the ‘othered’ minorities) to seek refuge in stronger unity around their exclusive symbols. The halal food being problematized after 2012 is not a new cultural practice and does not concern non-Muslims how they chose to consume their food. Halal meat only means that they let the blood of the slaughtered animal flow out fully before it is consumed. The extremists push the ‘other’ towards more exclusivism rather than creating an environment of cultural exchanges and dialogue.

Musthafa Nihmath, member of Asian Muslim Action Network (AMAN) told this writer there were about 3,000 mosques in Sri Lanka and all services were being conducted in Tamil. However, in the recent past, 5 mosques have begun their Friday sermons in Sinhala language in Colombo in rotation. The Moors are hard working and higher proportion of them are business entrepreneurs. The cab driver told this writer that every other shop or business belongs either to Moors or Tamils. That may have been exaggeration. That is why their business and mosques are targets.

The extreme right wing nationalists in all the countries are able to exploit the feelings of relative deprivation that the poor among the ‘majority’ community feel and convert it into hatred against others belonging to more or less same class but following different cultural traditions and hatred into violence. These feelings could be checked by appropriate education and dialogue between and within communities. The Constitution of Sri Lanka, as indeed to India mandates state to treat all citizens regardless of their religions equally and afford all citizens adequate environment and space to freely practice their religion. However, the executive of these countries fail to administer the law in letter and spirit and impartially. As a Sri Lankan minister told a group among whom this writer was present, few people involved in violence are put to trial and even fewer are convicted. The impending violence can be prevented if hate crimes are checked in time, intelligence strengthened and acted upon and bureaucrats are made accountable. Though the Sri Lankan Govt. took stern steps by declaring emergency to control riots and clamped down upon social media, the executive misused emergency provisions against the minorities. As the levels of inequalities in Sri Lanka are increasing, the economic elite fund right wing nationalism to problematize perceived or factual growth of poor from the ‘other’ marginalized communities and take gaze off them and structures that enrich them with corruption occasionally becoming political issue.